Judge Carol Kuhnke Cheers for Adoptions Two Years After Her Negligence Contributed to The Death of Her Adopted Son.

Imagine an embezzler's blatant lipwork to tell us about "the joy of good financial management". Last month judge felon Carol Kuhnke personified the Adoptions equivalent of that aberration during an event for the National Adoption Awareness Month (NAAM). This hypocritical judge pretends people are stupid.

Shameless Carol is quoted saying during this year's event in Washtenaw county, MI:


When kids do find families, it's overwhelming to see the joy when the adoption is finalized [...] and the regards are 'just too great to number,' [...] Adoption gives you more back than what you put into it [...] It's just a very fulfilling way to build a family. 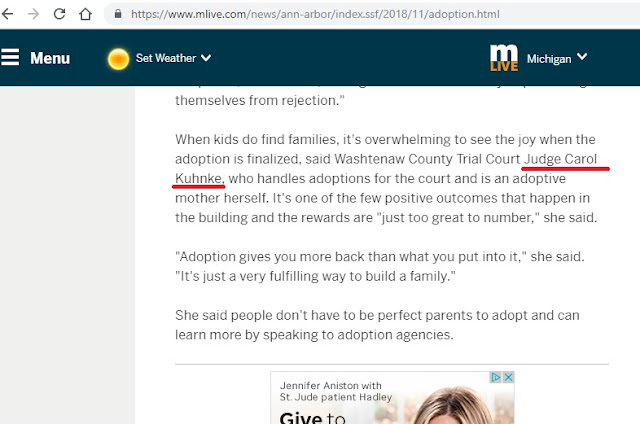 The message would be fine except for the irony of being uttered by this judicial celebrity-wannabe, whose negligence and injudicious choices contributed in multiple ways to the fatal overdose of her adopted son John Kuhnke in November of 2016. Carol Kuhnke's criminal and stupidity factors that culminated in such tragedy had been adding up for several months or maybe years.

Some highlights of the police report from when judge Carol Kuhnke got busted for stashing illegal narcotics relate to her fiasco of foster-parenting:

You might recall that both the special prosecutor and the Judicial Tenure Commission inexplicably declined to prosecute and file a complaint in the Michigan Supreme Court, respectively, against judge Felon Kuhnke. Child Protective Services does not seem interested in pursuing this issue either, notwithstanding that this time the victim of Carol Kuhnke's inherent ineptitude was a teenager: the one who Carol Kuhnke adopted.

Since then, felon Kuhnke keeps reminding the special prosecutor that she "outsmarts" both him and the State of Michigan altogether by not recusing from case no. 16-870-FH, People v. Sarah Stein (Washtenaw County), where this judge felon just keeps adjourning the trial of her [sort of] look-alike.


Case 16-870-FH, People v. Sarah Stein is the criminal matter where one witness for the State is precisely the detective who busted Carol Kuhnke for illegal possession of drugs.

One notorious detail from the detective's inventory of J.D. Carol Kuhnke's domestic "Juris Drugstore" is that even Maisie the canine supposedly has to be medicated for anti-anxiety. The idea of a dog with anxiety at judge Kuhnke's place is very telling of the Kuhnke-mess that spills in court proceedings she presides. 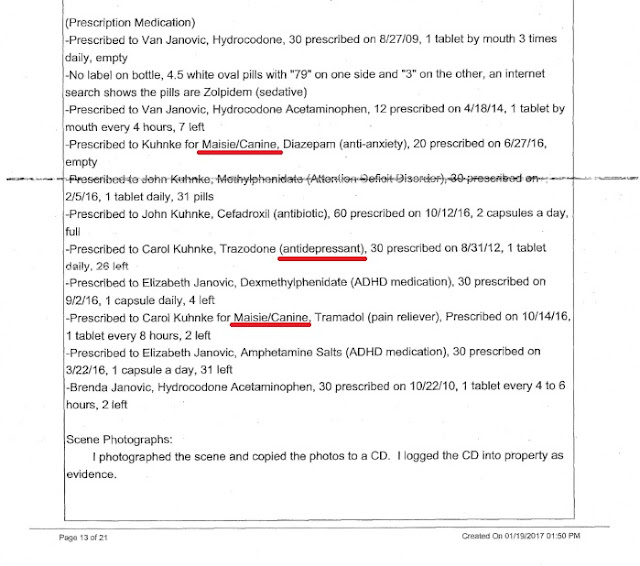 Let us momentarily put aside the shocking circumstances under which Felon Carol recklessly left the teenager who two days earlier was still undergoing rehab treatment. If felon Carol Kuhnke felt the joy and fulfilling of adoption that she babbles, why does she need anti-depressants?

Now this non-prosecuted felon gets in the spotlight to cheer for the wonders of adoption, adding that "people don't have to be perfect parents to adopt". In the embezzlement analogy, this amounts to the embezzler telling us that "people don't have to be prodigious quants to run a business". Although technically true, that specific individual simply lacks the moral authority to strike a pose.

That's what We the People get with the Michigan judiciary.

Merry Christmas everyone except the scumbags!