All roads lead to Rome, but even more passwords lead to the target: The case for craxploitmes.

How many roads lead to Rome?

In this article, I demonstrate the use of buffer overflow as a technique for solving (at least some) crackmes in the 32-bit x86 architecture. The prevalence of protection mechanisms such as Data Execution Protection (DEP) and Address Space Layout Randomization (ASLR) renders this technique largely inapplicable in the x86_64 architecture, but the matter is still a worthy exercise in reverse engineering.

The prototype of challenge addressed here is akin to this source code, whereby the comparison between user's input and a hardcoded string precludes the execution of a supposedly inaccessible function. Since the opcodes in an executable will significantly vary based on the operating system and the compiler (and of their release versions, and settings), in this illustration I will apply the buffer overflow technique to the readily available crackme0x00. The platform used for this reverse engineering analysis is Windows XP.

In this simple crackme, user's input is compared with the hardcoded string "250382" (without double quotes). If hardcode and user's input are equal, message "Password OK :)" is displayed on the screen. At first glance, it appears that "250382" is the only input leading to the successful outcome. That is not the case, though, since it is possible to enter other strings so as to control what the program should do upon retrieving user's input. Moreover, where buffer size permits, it is possible to make a clean exit from the program  rather than making the executable crash and burn.

Indeed, a copy/paste of the output of this Perl command will serve as user's input or "shellcode":


The label of "shellcode" is an overstatement because strictly speaking the opcodes do not lead to an OS shell whereby the user can run any arbitrary commands. However, as discussed below, the resulting opcodes satisfy the various constraints that are needed for a clean execution.


The length of this quasi-shellcode suffices to overwrite the return address 401227h, which is the address that was pushed into the stack by the opcode at address 401222h (CALL 401310h). In this crackme, that is the only area of memory through which the user is able to control the EIP register. In fact, the last three bytes of the quasi-shellcode replace the return address with 22FF60h. That redirects the program to run the opcodes written into the stack by means of the quasi-shellcode.

Upon returning from scanf, the quasi-shellcode is validated against the hardcoded string 250382 (and validation obviously fails), but thanks to the overwriting of the return address the rest of quasi-shellcode gets the attention it always wished for: The address awaiting RETN is 22FF60h. 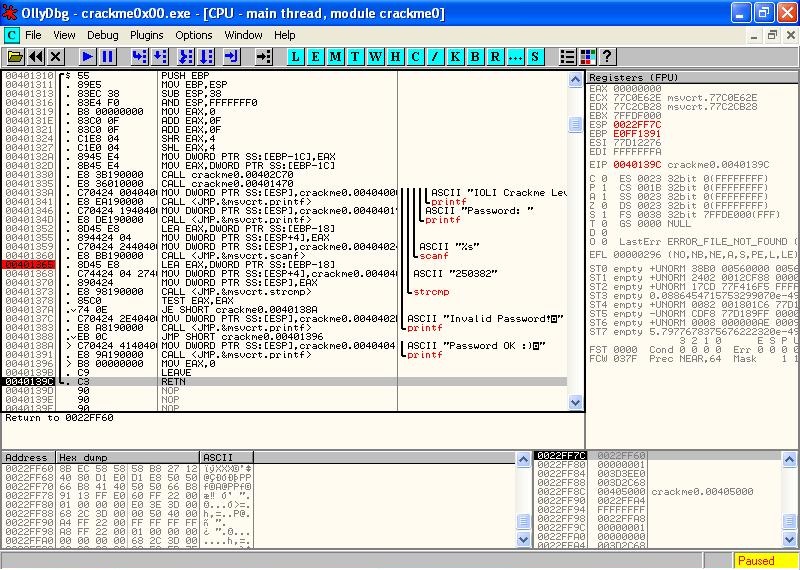 The new opcodes as read from the stack are shown in the following image: 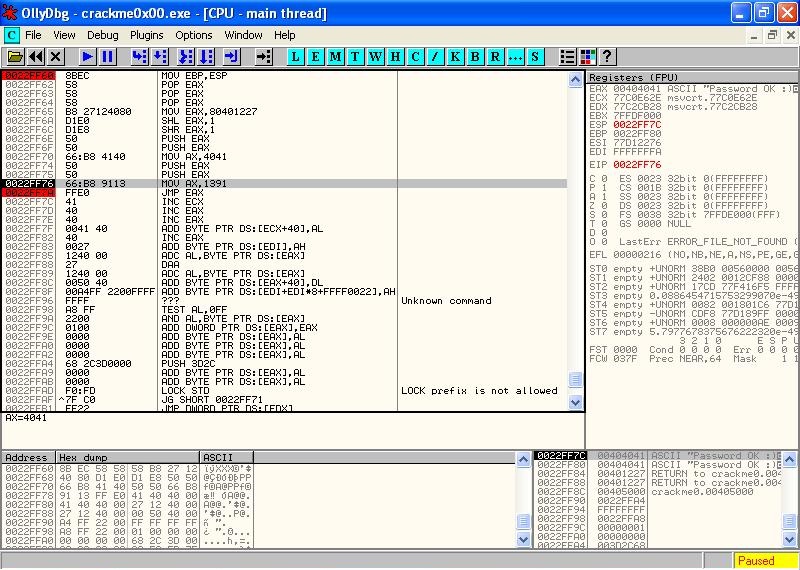 There are multiple constraints that make the writing of shellcode challenging. Creativity and optimization are indispensable if one aims at flawless execution:

Upon execution of printf, the program flow resumes in the original crackme routine. Hence the importance of setting the return address 401227h properly. 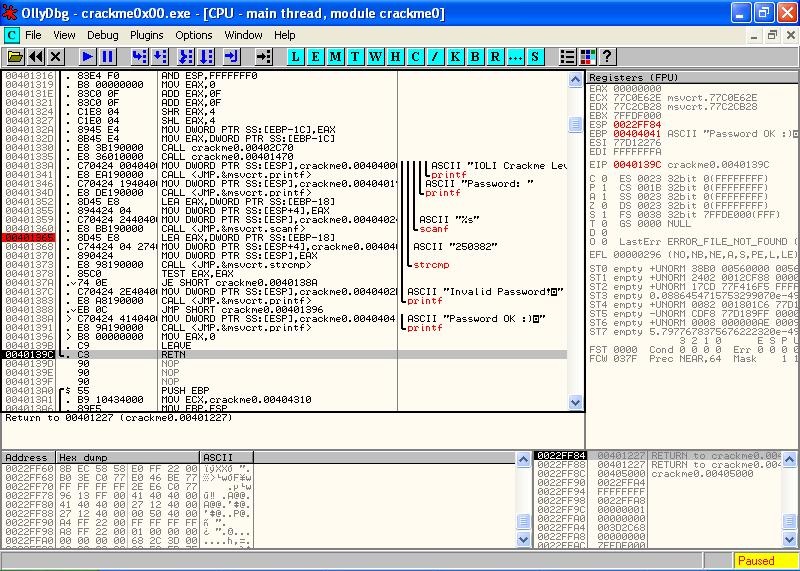 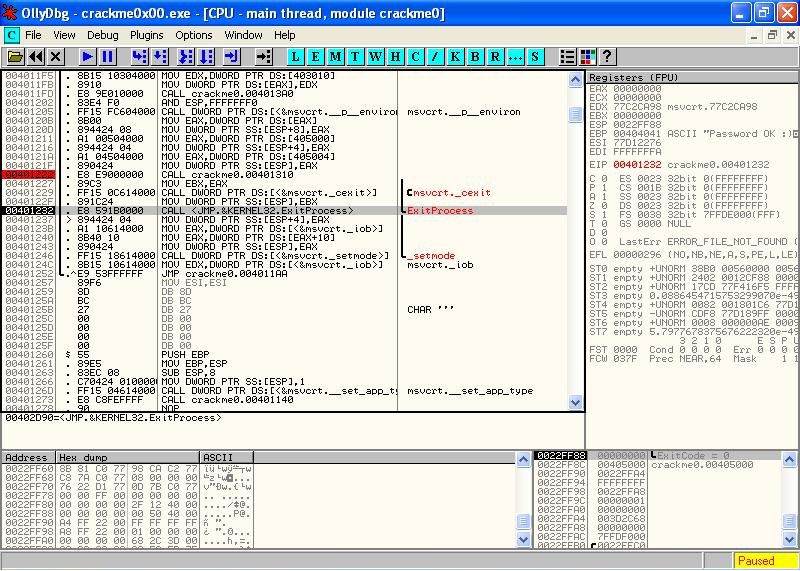 One alternative quasi-shellcode is to directly or indirectly execute printf twice with the benign message (for instance, to outweigh the prior display of message "Invalid Password!"). However, due to size constraints, that would be at the expense of a clean termination of the process.

The structure of this quasi-shellcode obviously allows for several minor or trivial variations while still satisfying all the constraints and even the ambition for a clean exit. Some variations are:


Thus, although at first glance one and only one unique password could lead to the printing of the benign message, the technique of buffer overflow leads to literally millions of valid "passwords" while still preserving a normal termination of the program.