Justice Kennedy's recent announcement of his retirement from the United States Supreme Court has sparked foreseeable speculation as to who will replace him. One of the individuals allegedly shortlisted as potential replacements is Joan Larsen, former "Justice" in Michigan's top and corrupt court. Records show that this shortlisted member of the judiciary falls short of meeting the moral requirements to sit on bench. 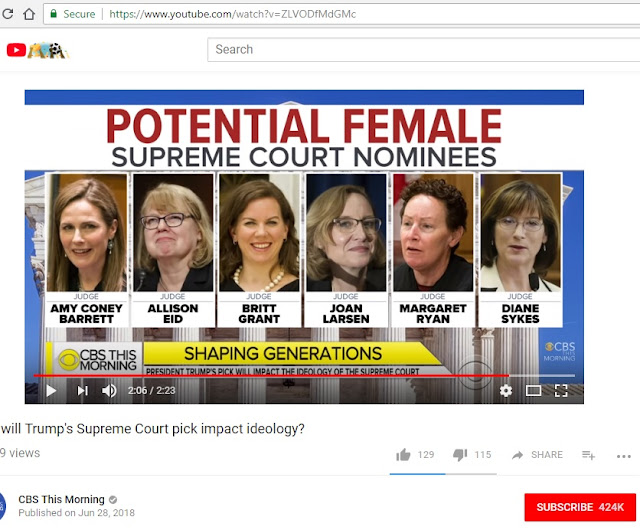 Over a year ago, while my two cases were in the Michigan appellate queue, there was in my mailbox a midsize flyer (~ 12in. x 7in.) about Justice Larsen and Justice Viviano "working hard to protect children". I threw the advertisement in the trash can without taking the precaution of scanning it first (back then I had not envisioned the initiative One Club Of Justicides). But the wasteful propaganda looked somewhat like this: 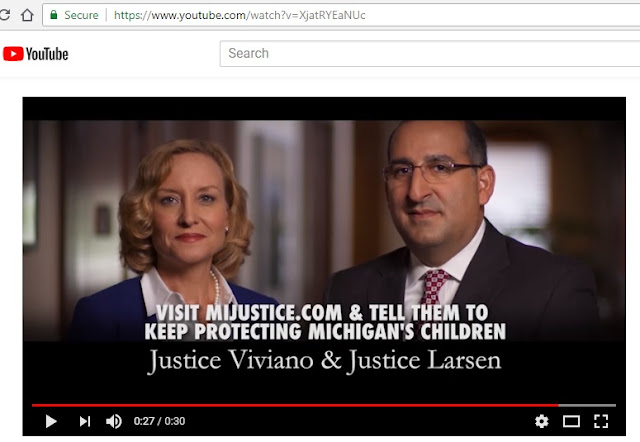 Months later, on July 28, 2017, the Michigan Supreme Court released the deplorable decision In Re Gorcyca, 500 Mich. 588; 902 N.W.2d 828 (2017). The Gorcyca decision single-handedly unveils the hypocrisy of former Justice Larsen. That decision showcases that Ms. Larsen in reality is not so determined to protect children, at least not to protect them from judicial abuse and perversity to which children are vulnerable (and suffer) in Michigan courts. 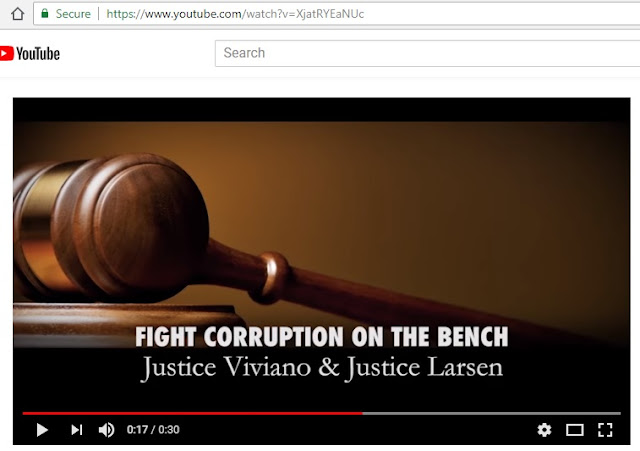 Judge or "Honorable" Lisa Gorcyca gained notoriety in the Hall of Judicial Infamy back in 2015, when her decision to jail three innocent kids caught the attention of the media nationwide. This unfit judge thought that jailing three innocent kids was the proper way to cure her gross incompetence in a multi-year divorce & child custody case that has featured a regrettable parade of for-profit attorneys (Disclaimer: I don't know how many of those attorneys took part in the embarrassing Amicus Brief that the American Academy of Matrimonial Lawyers filed in support of respondent judge Gorcyca).

Infamous judge Gorcyca jailed the Tsimhoni siblings for seventeen days for not having "a normal, healthy relationship with [their] father". She made her nefarious decision during her attempt to force these kids to have lunch with their father in the "intimacy" of the courthouse cafeteria. To read excerpts of the court hearing transcripts, see In Re Gorcyca, at 385-836. 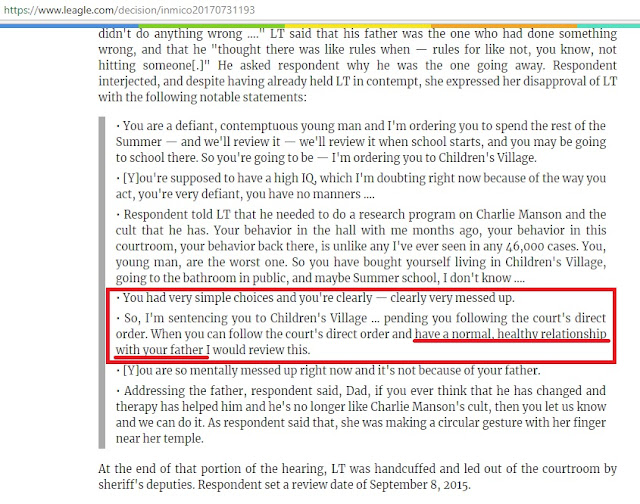 I would characterize the Tsimhoni's "day in court" as an act of judicial brutality, judicial terror targeting three faultless kids, and of judicial extortion that borders on human trafficking. During the litigation of my cases in Michigan courts, I have heard adults' voices trembling when they show up in court under much calm or peaceful conditions. Thus, I cannot conceive what a terrorizing experience this explosive and despotic judge must have caused to the three children.

This court "incident" (an euphemism for judicial tragedy) was one of the rare instances prompting the Judicial Tenure Commission (JTC) to file proceedings against an unfit judge. Let me be clear: Judicial corruption is very common in Michigan (felon Carol Kuhnke is a clear example of that); what is rare is that the JTC decides to address that judicial corruption. The subsequent hearing in the Michigan Supreme Court on March8, 2017, was rather a mockery of judicial "grilling", where the Justices repeatedly entertained the obstinate and ridiculous allegations made by respondent Gorcyca's lawyer.

Despite the circus of that hearing, the Michigan top court discarded the sanction of 30-day suspension that the JTC proposed. Instead, the Michigan Supreme Court decided that the sanction of "public censure is proportionate" to the brutal acts committed by Gorcyca in court. The Michigan Supreme Court even "reject[ed] the Commission's request to impose costs", In Re Gorcyca at 854, which further deters the JTC from proceeding against other inept judges.

One clear sign of these Justices' ineptitude is palpable in their repugnant excuse that because
"[n]one of the lawyers or trained professionals in the courtroom suggested that respondent's actions crossed the line nor did they offer alternative actions for the court's consideration [...] we cannot conclude that respondent's decisions are fairly characterized as 'willful failure[s] to observe the law.'", Gorcyca at 844. 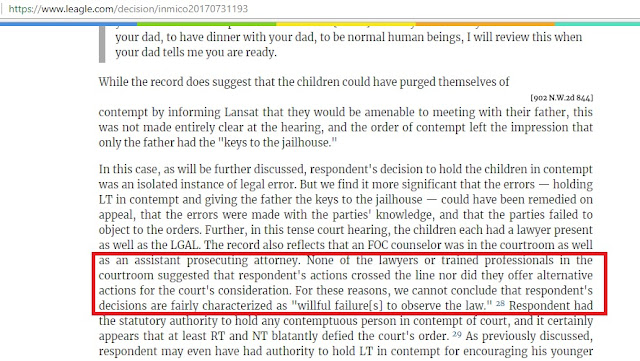 This is tantamount to a conclusion that a judge is allowed to commit any act of brutality --including extortion and other crimes-- as long as the "trained professionals" present around stay quiet.

Moreover, the Michigan top court ignores that lawyers are wary of protesting the judicial abuse they witness for fear that they themselves would get blacklisted in that court. The vast majority of attorneys are too fearful to even contend against an incumbent/judge in elections even where the judge is busted for a drug-related felony (e.g. Carol Kuhnke) or is embroiled in a pattern of judicial bias (e.g., Carol Kuhnke). The average lawyer is much more affectionate to his law practice than to the principle that innocent kids are entitled to their dignity, that they --like any righteous person-- are entitled to be respected by the most powerful judge.

In the matter of judge Gorcyca, only one Justice had the integrity to issue a dissenting opinion, and it was not judge Larsen. The dissenting opinion was issued by Justice Bernstein and without the support of any of his colleagues. Quite the contrary, Ms. Larsen is listed among the Justices who concur in the decision that "public censure" is sufficient sanction for Gorcyca's abuse of judicial power. That is how Justices in Michigan purport to "protect" children. 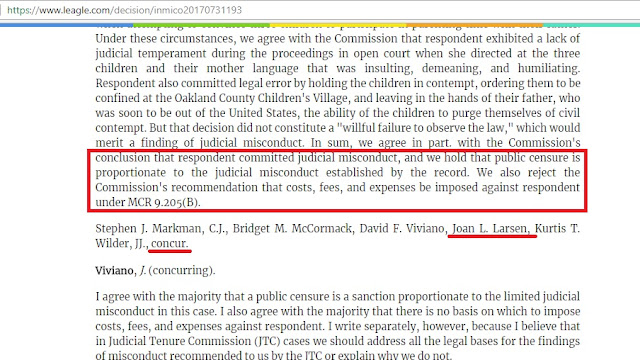 I don't know whether or not other individuals shortlisted as potential replacements of Justice Kennedy are worse than judge Larsen, but judge Larsen cannot reasonably explain how her worn out speech about protecting the children is any compatible with her reluctance to duly sanction Gorcyca's judicial abuse of children. I could only imagine judge Larsen telling the Tsimhoni siblings:

I will only join a public censure against judge Gorcyca because I don't think that terrorizing you in court and unjustifiably throwing you in jail for seventeen days are enough reasons to impose on judge Gorcyca a greater sanction. Why would we remove her from judicial office? She and I are judges after all.

But hey, to show we care about you, when we call you "blatant" in our published decision (Gorcyca at 844) we are writing only your initials instead of your full names, because I am all about protecting you and every children. That makes you whole, right?".

This might be a deleterious effect of being in the Michigan judiciary, but a judge who endorses or proceeds too leniently on another judge's perversity does not deserve being promoted.

As a person who has repeatedly and directly experienced the corruption and gross incompetence of various Michigan judges, the prospect that one of their complicit superiors is eyed for a spot in the SCOTUS appalls me; I am sure such prospect shocks the conscience of any other reasonable person. It goes against the much needed crackdown on Michigan's unfit judges, a crackdown that --realistically speaking-- only Michigan legislators and the SCOTUS could conduct effectively. But if Michigan's inept judiciary is allowed to swarm into either one of these two institutions, it will defeat the often mentioned notion of checks and balances.

Particularly in the context of protecting children, judge Larsen's leniency on Gorcyca's brutality against three kids seems detrimental to President Trump's efforts to mitigate the recent, international outrage about the children being separated from their parents at the U.S. border.

I haven't scrutinized judge Larsen's decisions in other cases. But the United States Supreme Court needs Justices who possess integrity, and my assessment of In Re Gorcyca is that judge Larsen fails that prerequisite. 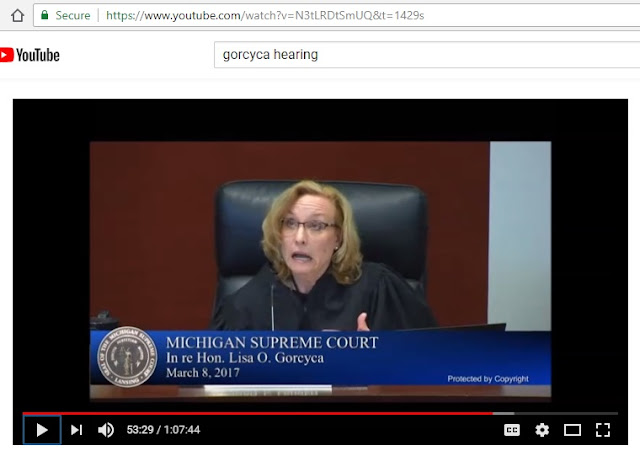